Yudice – The Expediency of Culture Ch. 1

Yudice – The Expediency of Culture – Ch. 1

Y.’s main claim in this book is that “the role of culture has expanded in an unprecedented way into the political and economic at the same time that conventional notions of culture largely have been emptied out” (9).  To achieve this, Yudice approaches culture as a resource, not as content.  In other words, Yudice considers how culture is used as a resource for both sociopolitical and economic amelioration.  Culture in Y.’s articulation is operating in much the same way as the immaterial results of biopolitical production in H/N.  To understand how culture now occupies a central role in political and economic relations, Y. offers two claims:  1) because the state has relinquished programs for the Arts in the post-Cold War environment, the market has stepped in to use culture to manage the social through education programs, racial harmony work, cultural tourism, job creation, crime reduction and profit (12); 2) Globalization operates in this context to highlight how different cultural backgrounds are valuable

Because culture is increasingly commodified, it is seen by numerous supranational organizations as a development mechanism because “heritage gives value” (13).  Further, the recognition of culture as investment and development mechanism is directly tied to the failure of neoliberal trickle down economics and the social, physical, and human development initiatives of the 1960s-1990s.  Cultural investment offers numerous returns, most notably fiscal incentives, publicity value and the conversion of nonmarket activity to market activity (think cultural tourism).  This conversion is typical because most indicators can’t measure qualitative data; as such, the economization of culture is an inevitable consequence of international cultural development schemes.  A lot of convergences here between Yudice and H/N in the sense that both see the “information economy” and the production of symbolic goods as integral to the future of modernity/altermodernity.

The “cultural economy” or “creative economy” is the resultant sociopolitical agenda that pushes multiculturalism as represented in art while speculating that economic improvement will be created by the creativity of individuals involved.  Interestingly, intellectual property paradigms and trade agreements have strongly contributed to this culturalization of the economy making even more clear the relationship between cultural economy and political economy.  This process – based on cultural and mental labor OR the expropriation of the value of cultural and mental labor through IP agreements – aided by the communications technology revolution constitutes (for Y.) the new international division of labor (19).  The ability of communities to harness creative energy – through art development projects – is at the center of this race toward creative gentrification; however, in the process many individuals are displaced.

Cultural citizenship is bound up in the idea that groups of people who share a social, cultural, and/or physical feature should not be excluded from participation in the public spheres of a given community on the basis of those features.  This means that culture becomes more than just ideas and values, it becomes a resource that can be utilized in its claim to difference.  This shifts value away from cultural content toward the politics of culture because difference can be mobilized toward socioeconomic and political ends (23).  Culture – and more specifically cultural difference – is expedient (suited to the matter at hand) because it can be used to multiply commodities and empower communities (25).

Y. highlights 3 arguments against cultural imperialism: 1) erases internal minorities of the external culture being exported; 2) global migration pattersn complicate the homogenieity of imperial powers; and 3) the ways that culture is taken up and appropriated is not single, unitary, and unchanged; rather, cultural products from “imperialists” like the U.S. are used in many, many ways.  (29)  From here he argues that there is a suitability between globalization and culture because the symbolic processes of culture are disseminated through globalization.  These processes are prefaced on “performativity” or the “processes by which identities and the entities of social reality are constituted by repeated approximations of norms as well as by those “remainders” that fall short” of the norm (31).  Because globalization brings different norms into contact with one another, it does much to effect the production of performativity; furthermore, because both individuals and societies are “fields of force” that constellate the multicplicity globalization creates the equivalent of Bakhtin’s heteroglossia (remainders) that still operate as a genre (norms) (32). 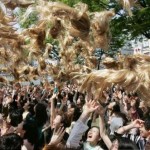 Yudice – The Expediency of Culture Ch. 1